Crossing paths with Headhunters in Burma 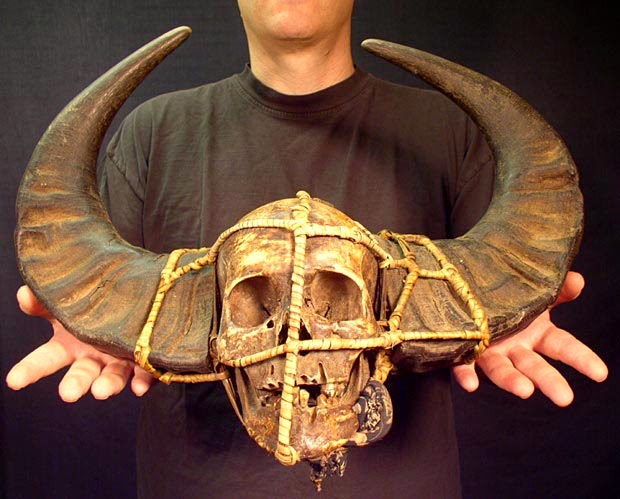 Who hasn't opened an old issue of National Geographic when they were a kid and looking with utter fascination, disgust and wide eyed amazement at the shrunken heads taken by such tribes as the Jivaro of the South American Amazon?
What kid hasn't wanted one of those creepy heads for themselves?
You kidding? Where can I get one?

Replicas were so popular that hobby shops sold shrunken rubber heads with stitched lips and eyelids.

In former times perhaps as little as one generation ago, two very different ethnic groups chose to
hunt human heads in Burma. One group are the Naga tribes of Burma's north west whose settlements straddle the border of India. Particularly the Konyak Naga were feared for taking heads in combat as a way to display their fierce courage. Arrows were driven through the eye sockets to prevent the spirits from finding their way back home.
That is one impressive set of trophies on your wall, Buddy.
Beats the hell out of bowling.


The other group of headhunters are the Wild Wa from northern Burma bordering China's Yunnan Province whose autonomous region boasted of whole villages whose walkways held human heads in various degrees of decomposition in stone lanterns. One such village was said to have an avenue of 300 such heads. Was it still there? Was it possible to visit?
Of course I had to find out if it was possible to find them.

Years ago in 1984, I was invited to a meeting by Abel Tweed the Foreign Minister of the Karenni Tribe deep into the jungle close to where the Moei River meets the mighty Salween River. Four hours in an 8 wheeled truck led to a river bank, the last outpost before we needed to take a long tailed boat maned by armed camouflaged soldiers up the turbulent river.

Karen children ran on the banks amidst fluttering butterflies with lengths of yarn hanging out of their earlobes.

Arriving at the camp, I was told that every one of the rebel leaders was here at this meeting of the National Democratic Front. General Bo Mya of the Karen, Brang Seng leader of the Kachin Independence Army and Ma Ha San the Prince of Vinghun, the leader of the Wa.
I wanted to meet him and to ask him to write me a letter of introduction so I could take photos of the Wild Wa.
I was told who to contact.
Every member was there.
"And he is here?".
"Yes, really".
"If you want to meet him now you can go along, he is staying in the house of my brother".

Walking over to a bamboo hut raised on wooden stilts, I walked up the stairs and entered a room silhouetted with figures sitting cross legged around a small fire drinking tea.
I sat down with my interpreter and was offered a cup.

Turning on my Sony Professional recorder I asked permission to record.
What followed was a remarkable interview with Ma Ha San, President of the Wa, one of the last living headhunters.

For those of you who have my book "The Vanishing Tribes of Burma", a new interactive edition has been published in Apple ibook. Utilizing the latest technology, we were able to combine 70 photos of more than 35 diverse Burmese tribal groups along with explanatory text from the Exhibition Edition
which was launched by Nobel laureate Aung San Su Kyi in Rangoon and combine that with short audio clips of tribal music including the 11 minute interview with a headhunter as relayed above.
Also the ibook has video clips of Aung San Suu Kyi's speech, and my speech at the opening of the exhibition as well as a video of me visiting the source of the Worlds Finest Gemstones, Mogok Burma in March 2014.

The brand new interactive ibook, The Vanishing Tribes of Burma can be purchased here for $4.99.

Order one now for the experience, the sights and sounds of a cultural world, which has, in many ways, already vanished.
Enjoy! https://itun.es/us/Ifjs4.l