The day we arrived in Sri Lanka, February 14th, Valentines Day, we heard news that some crazy Iranians accidentally blew the roof off their rented house in Bangkok fifteen minutes from our house with C4. Two guys ran out and one was caught. Then another staggered out, dazed and confused, he tried to catch a cab, but nobody would stop, so he lobbed a grenade at a taxi which exploded. The police came and he threw another grenade at them which bounced off a tree, ricocheted back, and blew off both his legs. Silly terrorist.

The news in Sri Lanka was that a road crew digging a new highway hit pockets of fine sapphire crystals near Kataragama and the gold rush was on. Thousands of ants marched to the honey jar. Fights broke out between the locals and the interlopers. Broken arms, bloody noses. My partner along with a minister went to have a look. They managed to get 415 ct.of glassy blue crystal before the army came in with rifles. 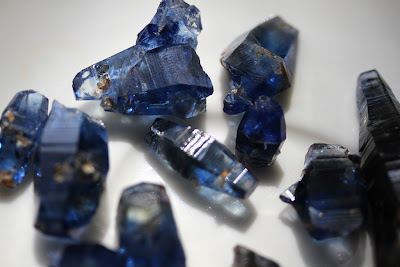 Today we drove back to Kataragama from Balangoda. Curiosity may have killed the cat, but it also put a man on the moon. We wanted to see the area of Thammannawa where the crystal came from. My wife and I as foreigners were not permitted to enter, and by recent court order our Sri Lankan friends found that neither were they.

All of the hotels in the area were full, from five star to no star, there was no accommodation. However, our friend, who is the Sri Lankan Ambassador to the Maldives, has a beach bungalow nearby Yala National Park, just a few kilometers from Kataragama. Yala has the largest number of wild leopards per land mass in the world.

Fifty meters from our friend's door is the warm Indian Ocean with shell covered white beaches. I found a cowerie shell with the top missing. All that was left was the bottom opening which looked like a toothy smile. Our friend unfortunately is away in the Maldives where they are having a coup after removing the president at gun point.

The bungalow is very funky with matching deer heads outside flanking the chairs on the verandah hung with kerosine lanterns and a monkey skull impaled on one long horn. The window slats are painted blue, yellow, red and green stripes. There is a black carpet of flies at my feet and needless to say the wife is not thrilled. The wind rips off the ocean but flies are tenacious. 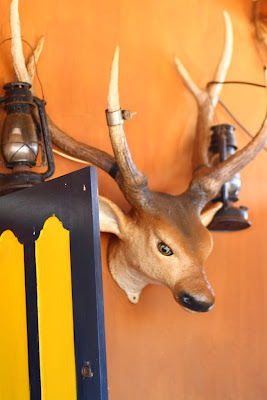 Some of the boys walked to a local fishing village and bought 6 kilos of lobster. One friend won't eat them because he saw them crawling around on the porch. We drove back around sunset in a three vehicle caravan of high speed land rovers on thin roads through tiny villages when suddenly a pebble flew off the tire ahead at about 140 kilometers per hour, hit our windshield and cracked it. My partner slowed down and we lost the convoy. 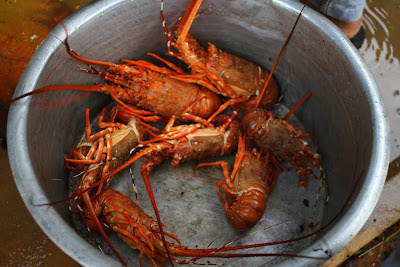 "Anybody got a sapphire crystal" I asked. A strange question except with this group as, naturally, everyone did. I took one sharp crystal from Manju, got out and cut a circle around the crack to keep it from spreading. Unfortunately it didn't work as the glass was laminated and the crack increased like a spider web.

Things heated up in Kataragama as the court order was still in place barring entry to everyone. The government Gem Authority had the idea to auction off small parcels of land but that fell apart quickly. Our partner went out again with the minister who is from that area, and has clout. Yesterday the army was overwhelmed and withdrew. 25,000 people streamed in to the area and they expect that number to double. An article was published Thursday February 16th in a newspaper called "Lanka Truth" regarding our friend the minister titled "Wijeyamuni Soysa declares war to plunder a gem mine". The article goes on to say that he is infamous for gem rackets and is engaged in illegal gem mining in the area. Apparently the newspaper is communist.

Back in Balangoda, the minister lay outside in a hammock tethered to palm trees with his servant fluffing his pillow. My partner was sitting in a chair on top of a grassy knoll. I came out to join them, sat down sideways in another hammock and fell out on my back with my legs sticking straight up in the air. A moment to relish.

This morning my wife is putting on her makeup when a scowling fang baring macaque came to the open door upstairs, raising his intimidating eyebrows, and threatened to come in. She screamed and I chased him off. Got to get a baseball bat. Now at dusk the downstairs living room is filled with flying termites. The two German shepherds, Blackie and Bulla run around snapping at the air. If you google attractions in Balangoda, you will find there are none. No museums, no movie theaters, not even a damn bar. Each buffalo here seems to be assigned one and only egret as a personal valet to pick off ticks and other undesirables.


The government land auction for potentially gem bearing land is back on for tomorrow February 24th. My partner along with many of the major gem players will attend. The 49 allocated plots were auctioned off each being about 3,000 sq feet, some plots sold for more than $200,000 each. The plot that my partner bought was supposedly the lot where the land was first removed for the road, and the original blue crystal was found. The gem authority sold all the plots for a total of $2,700,000 dollars.

Now we wait and see if there is anything actually there. Since there is no source for water, the soil all must be moved to a place where it can be washed. We will know in a few weeks what if anything is found.
Posted by RICHARD K. DIRAN at 3:06 AM No comments: