When we arrived in Sri Lanka on March 17, 2013, we were given our invitations by some very influential friends to attend the opening of the new international airport at Hambantoda on the following day. My camera was inspected upon entering the grounds and a yellow sticker was attached which read :'Checked Presidential Security Division".

We walked around the new terminal in the blinding heat of the morning to the VIP section B. There were thousands of people assembled and tens of thousands more behind the ropes for a glimpse. The Chinese built control tower loomed high in the background with the same architecture as the Chinese Olympic stadium in Beijing with its birds nest design.

Everyone was given a brown greasy bag with a hot dog inside, and a bottle of water. On the stage sat a dignified assemblage of orange clad Buddhist monks, politicians and business men. Speaker after speaker took to the podium to acknowledge this grand achievement.

Debilitating hours later with people actually fainting from heat stroke, some carted away in ambulances, an announcement was broadcast that the president would soon arrive. On several big screens his passenger jet aircraft was shown on approach, monks were loudly chanting, until his jet with a rubbery screech landed. President Mahinda Rajapaksa was the first passenger to disembark at this, the Rajapaksa International Airport. As he strode across the tarmac in his signature white tunic and burgundy scarf, the crowd erupted in cheers. 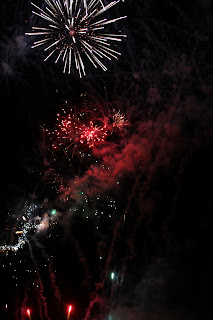 Another speech, and then another, one being translated from Chinese to Sinhalese, hundreds of costumed dancing girls with their burning bare feet, the military bands, the flyover in formation by the air force jets ripping low over head creating a massive sonic boom, and then the president took to the stage and spoke. Several other international jets landed from a variety of countries. After this, the opening ceremony was over and everyone filed out to the parking lots.

Our three cars were brought up and we all retired to Dixon Dela's the Sri Lankan Ambassador to the Maldives who has a bungalow on the Indian Ocean near Yala National Park where leopards roam, and peacocks dart through the foliage.We took a rest before lunch. Dixon showered and dressed in perhaps the loudest shirt I have ever seen since Jimmy Hendrix sang "Purple Haze" at the Fillmore. 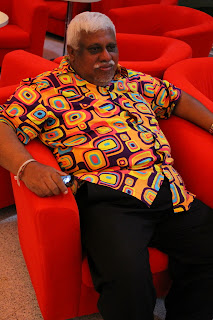 We then drove to a resort called "The Safari" which served a buffet of mostly curries, which I am sick of eating, so I had fish and chips.

Later in the evening we also had invitations to dinner and cocktails at a private reception inside the new airports terminal. After a few glasses of fine red wine, and numerous finger foods and fudge brownies, President Rajapaksa entered and walked around greeting everyone. 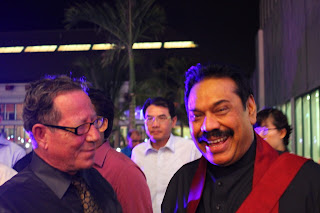 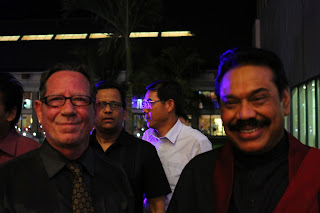 A very impressive fellow, he like so many other world leaders carries a blinding aura of power and invincibility. Hey, any time you are eating dinner with the guy whose face happens to appear on the money you are spending, it is all is a bit overwhelming. 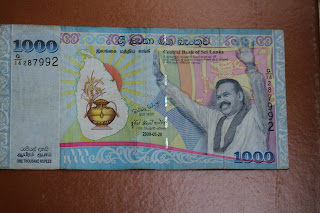 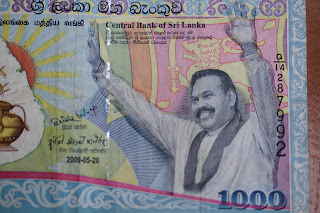