Two Legs Are Better Than One

The ancient, abandoned capital of Pagan had flourished from about the ninth century until-as one theory goes-the armies of Kublai Khan overran the city and its one million inhabitants for not paying tribute, thus causing the entire population to flee. Whatever the true reason for Pagan's demise, the city's thousands of magnificent temples, stupas, and pagodas were left to stand abandoned, silently and intact, for many centuries. The huge city-situated on a plain as flat as a drum, and bordered by the gigantic Irrawaddy River on one side, and mountains on the other-remains one of the great wonders of the world.
I left Taunggyi in the Shan State heading for Pagan. There were at least 25 people crammed into every space of the truck. People hacked out the portals and they smoked nonstop, next to the gasoline drums; babies, held by their mothers, pissed from the tailgate and it flew back into our faces; and old ladies leaned on me and dug their bony elbows into my ribs. My ass felt as red and swollen as a baboon's from sitting on the truck's wooden bench for ten hours. All the while the eyes drilled me, and there were probing questions.

"Are you a tourist? Where is your group?"

"Have you been to Burma before? How many times?"

"Where have you been? Where are you going?"

I finally arrived in Pagan. Nearly two years before, I had ordered a lacquered table in five different colors from the best shop in Pagan. the table would take a full year to make, so I'd left a deposit of 1,000 Kyats. The lacquer ware of Pagan, in all of its applications, has been produced for centuries. The extremely dry climate is ideal for the drying processes, which must be undertaken for every layer of lacquer applied. Lacquer can be painted on teak furniture, applied to woven bamboo for utilitarian articles (such as monk's alms bowls), and even to woven horse hair that is so delicate and flexible that one side of a cup lacquered with it can be pressed to touch the opposite side. It can be etched and is waterproof. I paid the balance, and a final hand-polishing with petrified wood dust and teak charcoal made it gleam.

I invited a group of local friends out for dinner to feast on fresh river prawns.
One friend named Mya Mya had a sincere appreciation for Burmese arts and culture, and mentioned to me that several stone fragments of a Buddha statue dating from the late eleventh or early twelfth century had just been unearthed near the huge Sulamani Temple.

The next day Jizshe and I drove on a dirt track lined with cactus and thorny scrub brush that could only be eaten by goats. We plodded on along a rutted track until he pulled his sweat-glistening horse to a stop at a lonely enclosure within sight of Sulamani Temple. Here, a long wooden table was covered with chicken-wire to protect artifacts that had been unearthed from near the temple. A family lived near this enclosure, a husband and wife with two daughters, whose sold job was to guard the relics. Their house was more like a temporary shelter built of bamboo.

As I leaned forward to get a better look at the massive fragment of the Buddha's head-classic, with fine lines and curves, indicating that it was from the twelfth century-I noticed a girl with a radiant smile standing beside me. When I drew back to look at her, I saw that she used a crutch and was missing her left leg below the knee. I asked Jizshe to ask the family how this had happened, and they said she had simply been born that way. By the glow of her smile I could see that in no way did she see her condition as any particular impediment.

Hkay Ti Win was twelve years old and had huge sparkling eyes. Something in her spirit inspired me. So many people with no handicaps defeat themselves in life, while this girl, hobbling along on one leg, was filled with hope. I took some pictures of her, some with the Canon and others with the Polaroid, which I gave to her. She was attending school and was obviously a bright student. I could clearly see her family's love for her, as they dressed her in the best cloths they could afford, and her sister tied ribbons in her hair.

One of my dearest friends in Rangoon, then eighty years old, was Dr. Maung Maung Taik, who was the chief forensic pathologist in Burma. He estimated that he had conducted over 30,000 autopsies, in various cases, including one on his own son, who had died of a drug overdose years before, I couldn't even imagine a man conducting an autopsy on his own son! He had also performed the autopsy on General Aung San, Aung San Su Kyi's father, after he was assassinated in July 1947. Dr. Taik had trained hundreds, perhaps thousands, of doctors, and he was looked upon with the great respect that only a lifetime of service can merit. He was also a noted golfer, who still played several rounds a week. He used to play with General Ne Win, who in his paranoia, wore a metal helmet, even on the course, as he expected to be shot by his political enemies.

Dr. Taik drank a few glasses of single-malt whiskey every day, and was one of the best cooks I know. He probably spoke better English than me, and during my visits we often debated the origins of words, consulting a dog-eared dictionary several inches thick. He would often invite me over for a dinner, and during the frequent electrical blackouts in Rangoon, would start up his 100-year-old gramophone with a hand crank, and we would listen to thick scratchy records.

The beauty of the statue fragments I had seen in Pagan remained in my head, but Hkay Ti Win's family were the guardians of the pieces and I could never have compromised them because the archaeological authorities in Pagan would certainly have known about them. When I got back to Rangoon, I mentioned to Dr. Taik that I had met a girl of twelve years old near the Sulamani Temple, and that she had been born without the lower half of one leg. he asked me where the leg ended, and I told him just below the knee. the joint at the knee functioned perfectly and the upper tibia and fibula were present, ending in a blunt stump.

Dr. Taik mentioned that one of his former students was now the superintendent of the National Rehabilitation Hospital in Rangoon, and that he would be happy to introduce me, as they could provide a prosthetic leg for young Hkay Ti Win.

I immediately arranged to have her and her mother come to Rangoon for treatment. It was the first time she had ever left rural Pagan. the journey took twenty hours because the bus blew five tires on the way.

The hospital had open windows and overhead fans that didn't work. In a courtyard scores of patients awaited new limbs or learned to use their new prosthetics with nurses assisting them. Hkay Ti Win, her mother, and I were shown into the superintendent's office, where Dr. Taik introduced us to Dr. Min Lwin Ramu, who examined Hkay Ti Win's leg.

Dr. Min Lwin Ramu said that they would be glad to provide the new prosthesis and the training to walk on two feet. They would also provide lodging for Hkay Ti Win and her mom, as well as food. Dr. Taik said that if I didn't have the money, it wasn't a problem since they would provide all of this for free. I said thank you, but no, I was willing to pay. the entire cost was only a few hundred dollars, which I happily paid.

I learned later that Hkay Ti Win and her mom had stayed at the hospital for a few weeks, and Dr. Taik and some of my Rangoon friends visited often, bringing cookies and magazines. The cast for a new limb was being transformed into a new leg, which she would be taught to use by the staff. With her new leg cast fitted, Hkay Ti Win was soon able to run and ride a bicycle for the first time in her life. I asked her for only one thing in return-the well-worn, well polished wooden crutch that her father had made for her. I have that crutch now, in Bangkok. 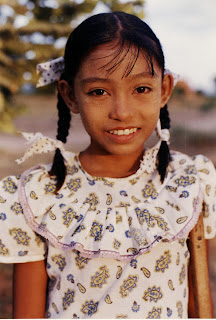 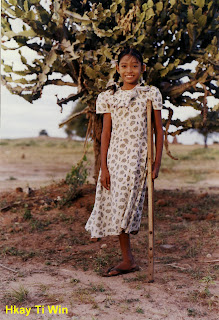 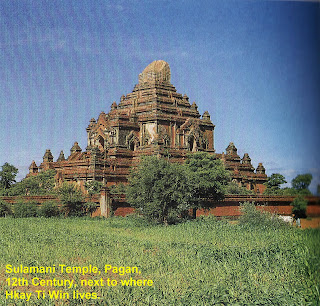