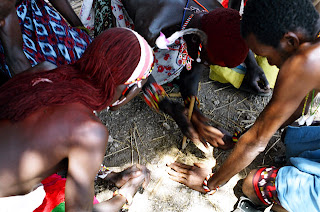 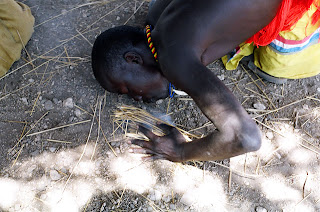 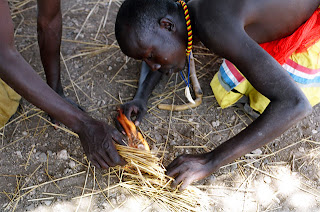 It is said that Prometheus defied the gods and stole fire as a gift to men. For this he was severely punished by being chained to a rock and having his liver torn out and eaten by an eagle everyday. Gods are never pleased when mere mortals usurp their power. Fire is the element that ends the life of the phoenix consuming him in a pile of ashes, and is the same power which  resurrects him to a new life. Light is defined and separated from the darkness by fire, illuminating, silhouetting and expelling hungry carnivorous animals lurking at the porphyry of the unseen. Fire drives away evil spirits from a community and from the imaginations of men.
Two million years ago a strike of lightening may have hit a tree or a dry bush, perhaps a volcano erupted and allowed paleolithic man to capture that stunning power and bring it home like a treasure. Who was that genius who recognized the power of fire?
Power to be warm in the cold, power to distinguish your neighbors at night from your foes. Power to burn down your enemies settlements and steal their wives and goods. Fire to cook your meat to a crispy sizzling brown rather than that same old bloody raw carpaccio.
So if your Zippo looses it's flame, your box of matches has gone soggy, and you just can't wait for that next strike of lightening, or for that rumbling volcano near you to explode, teeth chattering in the darkness, here is your solution brought to you by the Samburu tribe of Kenya and Tanzania. Home made portable, all purpose Fire.
Try some today!
Posted by RICHARD K. DIRAN at 3:28 AM